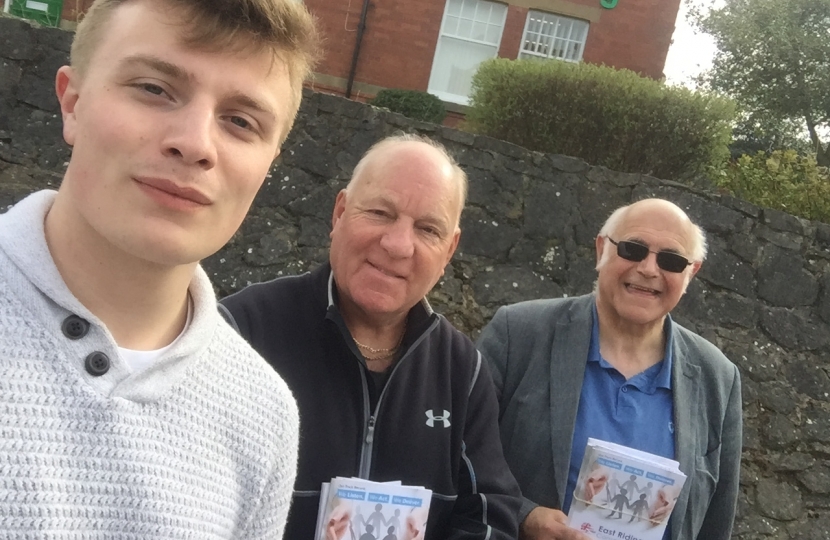 Wolds Weighton Ward councillors Mike Stathers and Leo Hammond welcomed the news, describing it as a huge boost for the residents of both towns.

Cllr Stathers, who is also Deputy Leader of East Riding Council, said: “This news could not have come at a better time. The pandemic has hit our communities hard so it’s great to have such wonderful news.

“Market Weighton has long needed additional funding for sport, for facilities that will particularly be welcomed by the youngsters in the town, and myself and my fellow Ward councillors have been pressing hard to get these allocations approved.

“Likewise, sport in Pocklington receives a massive boost with large sums allocated to the rugby, cricket, bowls and tennis clubs and the funding awarded to the Canal Society and the Gliding Club will not only benefit the individual organisations but it will also further enhance the area’s tourism potential.

“I’m especially delighted to see £55,000 given to Yapham Cricket Club. I played there as a boy of 12, alongside my late father, and it is good to see such a small village club survive and flourish over so many years. Overall, this is such good news for both towns.

Cllr Hammond said: “This is a big win for Market Weighton. This money will ensure a sustainable future for both football and tennis in the town, two things we have been pushing as Ward councillors for a considerable time.

“These organisations provide invaluable services to our communities and we have been and continue to be more than happy to play our part in helping to preserve and grow them.”

The allocations come from the Council’s commuted sums programme which is made up of contributions from developers of new housing schemes in each locality. The schemes were formally approved by East Riding’s Cabinet following thorough research and consultation to identify the area’s key sport and recreation needs.

Market Weighton Town Council - £55,800 for play area improvements and a further £7,253 for the Canal Trail

Pocklington RUFC - £120,000 for a new clubhouse and floodlights

Pocklington Tennis Club - £100,000 for a new structure to create an all-weather playing environment

Wolds Gliding Club - £117,000 for a high-performance glider for disabled users

At its Full Council meeting on the 27th July 2022, Conservative led East Riding Council voted to

back York’s bid to become the new home of Great British Rail.

Great British Rail, the Government’s new lead authority on the UK’s rail transport has been